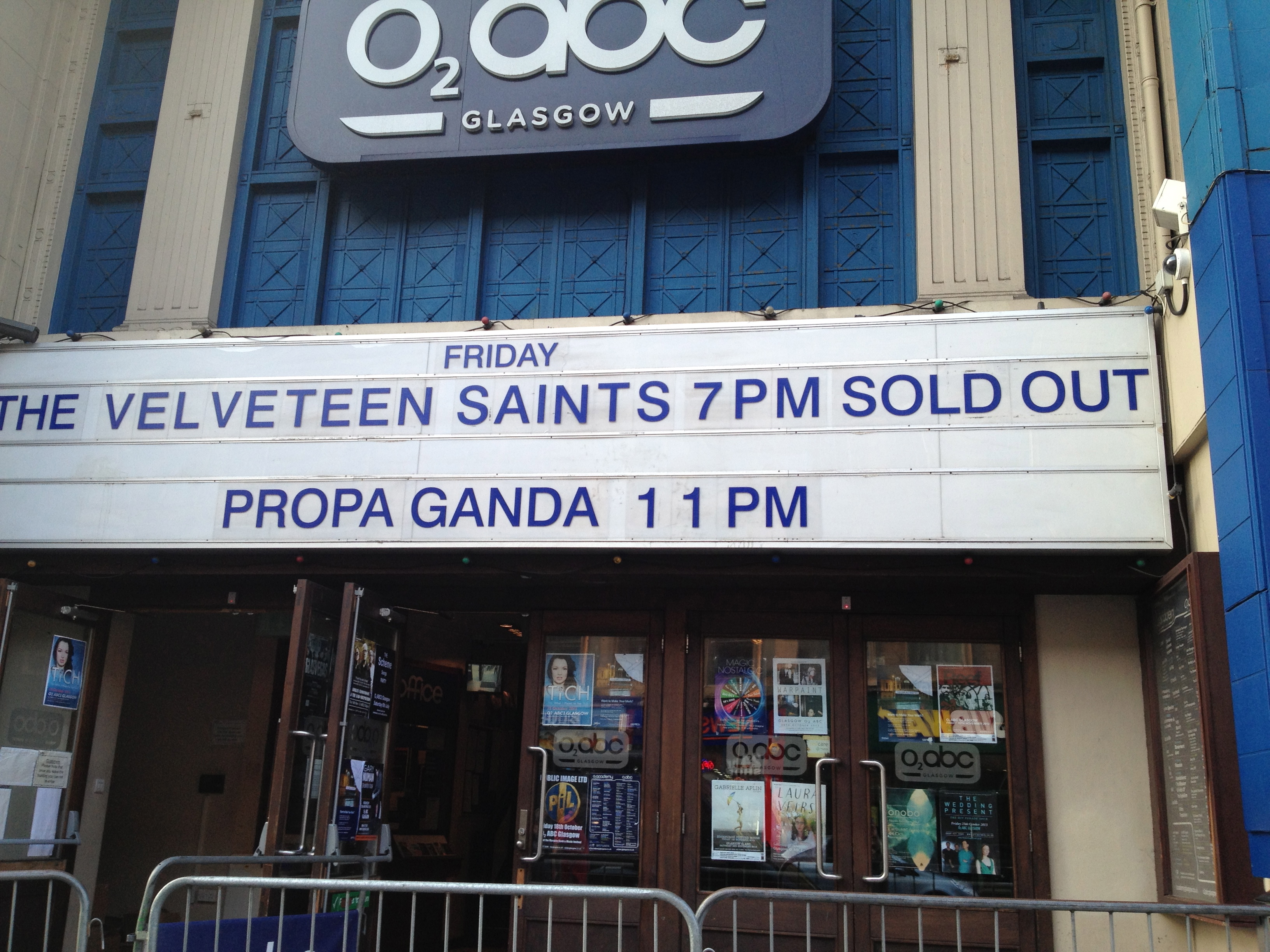 A little over three years ago, it was my absolute pleasure to see Twisted Wheel play in Harley’s in Bathgate.
You know the intimate feeling of a small gig you just can’t beat. Well, this was like having the band in my living room. Harley’s, an upstairs of a pub venue (God rest it’s soul) really can’t have held many more than about 50 people. What makes it memorable was the noise though. Having missed the band for one more pint of Strongbow the previous summer, whilst supporting Oasis at Heaton Park, they brought that loud, unapologetic sound of theirs straight into the ears of the lucky few in attendance. Lucy The Castle, You Stole the Sun and We Are Us in particular shook the place to it’s core.
Fast forward a couple of years to October 2012, I then had the pleasure of hearing this young band called The Velveteen Saints. Supporting Tim Burgess at Oran Mor in Glasgow, I was pretty chuffed to have stumbled across them. These guys sound good I thought.. destined for big things.
Turns out that John Robb thought so too, having named them band of the day on “Louder Than War”, back in Jun of 2012. Alright, perhaps I’m playing that down a little.
What he actually said was (http://louderthanwar.com/new-band-day-velveteen-saints/) -Velveteen Saints have come to save rock n roll.
So, after hearing them live and hearing a couple of tunes on Soundcloud I was delighted to be invited along to the next couple of Glasgow gigs at Nice n Sleazy and Broadcast.
I reviewed both gigs and each time the crowd got a little bit bigger.
At the end of the year, Jim Gellatly compiled Scotland’s Greatest “Under The Radar” Album 2012
Shortly after he announced Jim’s 10 for 2013.
Who appeared on both lists? You got it, The Velveteen Saints.
As the New Year rang in, I found myself blaring the two track CD in the car, wondering when their next gig might be. Rock n Roll is Dead and Wake Me Up both corking tunes.
In late January, the band asked if I’d like to go along to the studio to hear them record some new songs. They were recording some new material prior to another gig in March, this time in King Tuts.
Of course, I jumped at the opportunity.
The King Tuts gig was a sell out and another mightily impressive show.
Jump forward another couple of months and the band started to feature on festival line-ups such as Isle of Wight, T in The Park and Kendal Calling. Then the small matter of a support slot at Delamere Forest with The Charlatans.
With Isle of Wight under their belts, the hard working Glasgow band have still managed to fit in another Glasgow gig before the remaining summer dates.
Of course, it’s a bigger venue again, this time the O2 ABC2 in Glasgow on 05 Jul. It’s looking like it will be another sell out too. And just to make it even more of a treat, they’ve invited Twisted Wheel along as special guests.
You can check both bands out on Facebook or Soundcloud and take a listen for yourself.
Amidst the chaotic year The Velveteen Saints managed to squeeze in an interview with me too.
Backstage, we spoke about their Coatbridge roots, the Velveteen Saints sound, (perhaps a little Raveonettes meets Jesus and the Mary Chain) their creative process, the music scene in general, touring and their own personal highlights of the last year. They work tightly as a band to create the sound, honing it with each live show.
Gigging has played a huge part of their lives, they’ve enjoyed and learnt a lot from it and are all pretty excited about what the next year holds in store for them. They’re a humble bunch of guys though, each of them acknowledging a lot more hard work is in store. I asked each of them them to sum up the band in one word. And four genuinely nice guys couldn’t have summed it up better had we rehearsed it…(which we didn’t)
Charming, drunk, temperamental and progressive they say.
Don’t take their word for it though. Or mine.
Head along to the O2 ABC2 in Glasgow on the 05 Jul to see for yourself.

One thought on “When The Saints”