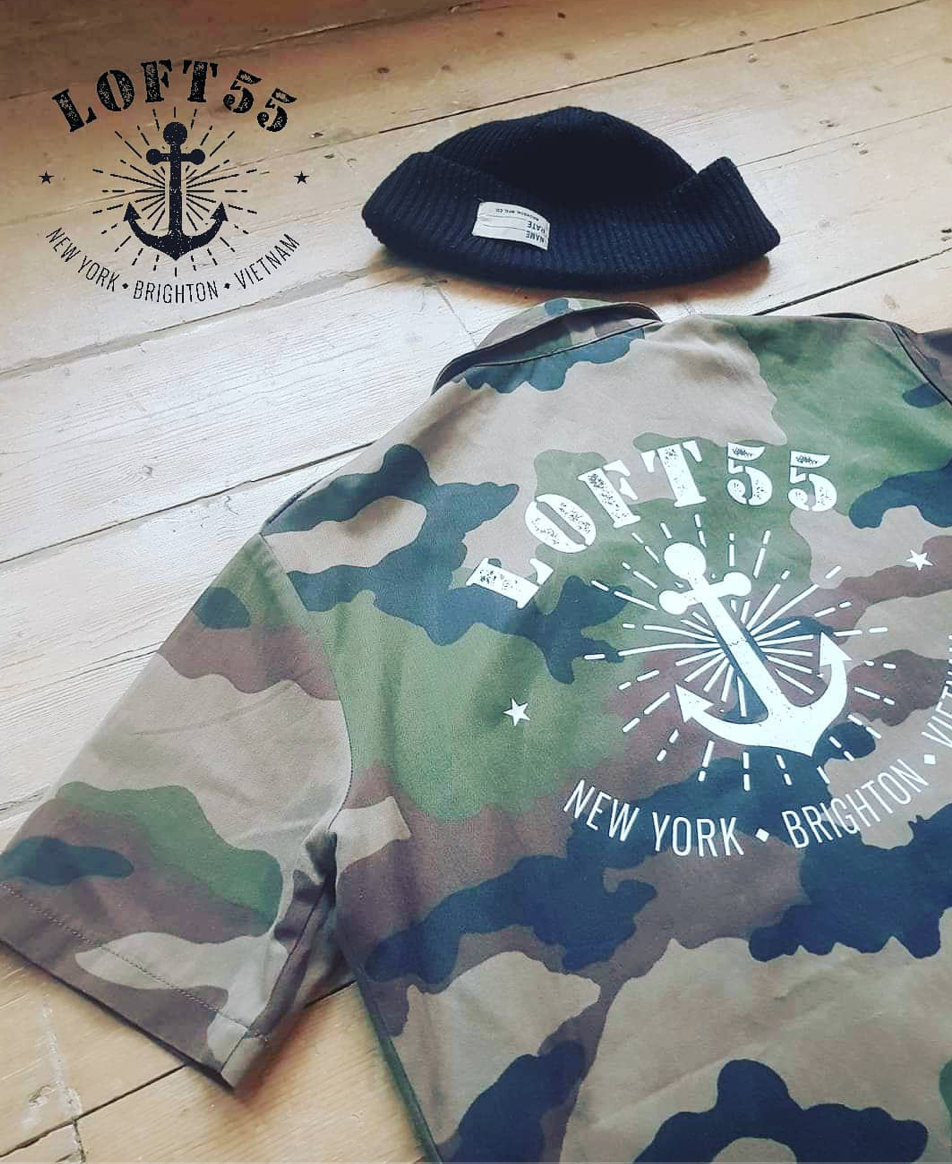 In fact it’s about as far from ‘just a clothing line’ as it gets. There’s a message which is underpinned by some stellar ethics. It’s about bringing people together in our physical communities. Born out of a love of social gatherings, good music, good style and vintage military attire, it’s attracting a growing community.
If you’re interested in the background and ethos behind it, you can read all about it in the first post here.
As it happens, that was almost exactly a year ago.
“How do you fancy doing a follow up interview” I recently asked founder Ali. Of course he was only too happy to oblige.

First of all, I’m interested to find out how people have responded to Loft55 in the 12 months since it launched?
He’s keen to get stuck right in, and thanks me for asking.
He’s been really humbled by the response, which has come from friends as far back as primary school & old work mates from his time in the military. Communities he was part of from Somerset to Scotland, Newcastle, London and Brighton, have responded along with many others connecting in the online world.
The number of people is not the important thing though. So what is? In Ali’s own words,
“Lots of good people from all walks of life people spread out across the world, including the UK, Spain, Cuba & Japan. Incredible to be connected and engaged with people like this.”

When we talked initially about aspirations, Ali told us it was more about the journey than an end goal. A year on then, I was keen to find out what the journey been like.
He tells me it’s very much a day to day thing. Rather than think about the direction, he’s just letting things happen.
“The enthusiasm is incredible. To think, it’s really a platform to celebrate ‘physical community’ through clothing.
I feel very much more connected to who I would like to be and what I value in everyday life.”
The designing, he enthuses, is flowing along comfortably. The sweatshirts have been a ‘banger’ and the last military bag found a new home just 6 hrs out of the workshop.
He allows himself a brief look back to consider.
“If I told my 7 year old self that would have happened? Insane !!! Literally this could go anywhere and I like the uncertainty.”

So, there’s clearly been a lot of fun whilst learning along the way. But what’s been the most enjoyable part of it?
He gives this some thought as there’s different aspects. Design wise, he’s really enjoyed the repurposing of the military bags. Collaborating with friend and local craftswoman Paula Kirkwood, (who he credits with many of the ideas, and ‘putting in the graft in the workshop’) has been both rewarding and enjoyable.
On the human side, he’s really enjoyed applying the personal touch in the process.
“I get to actually stop and think about the person. Be they an old friend or new acquaintance. It all helps. Especially when I write my little thank you cards. That really focuses my mind and helps me to reflect on the community I am part of or have been part of with that very person. It’s good to get off the treadmill sometimes and reflect or count ones blessings. Everyone should try writing letters to people in any shape or form.”

What’s the biggest thing you’ve learnt, I ask.
Ali tells me he’s realised that it’s ok to step out on your own as a creative person and tell your own story.
“For years when I was djing I always felt inadequate. I covered this by being part of something that didnt have my name all over it. Sure, people knew it was me but I didnt feel comfortable showing it. Now through Loft55 Ive learnt that it’s ok to put your  name to something as failure or success isnt what it’s about. Just ride the wave and tell your story. Have a positive motive and be authentic with it. If you do that then that is all its about. Thats why I can feel comfortable designing clothes. Im nearly 50. By rights this shouldnt be what a 50 year old man starts to do in life. Sod that !!! I’m jumping straight in with both feet.”
Well, Amen to that brother!

We move on to talk more about the message behind LOFT55. Ali maintains a pragmatic view here that delivering this is a work in progress. He’s noticed genuine enthusiasm from people though and expresses gratitude at Loft55 being supported with him as the chap behind it all.
Where he does consider success already is that the community aspects are all tying in very nicely with the clothing & musical aspects.
“All of it works together as a creative piece, made easier when you let it flow. Friends are friends with or without music and parties. I used to try and force things until I met my wife (Nic) She changed my whole view.”
Co-incidentially, he has a daytime outdoor party in a month and is doing both the music and clothing thing.
He’s looking forward to this and tells me…
“This is perfect as I believe that neither are mutually exclusive. If you’re into the experience of being around people, combining the experience of sampling clothing, can make it a lot more interesting. The high street could learn a thing or two in my opinion from that. Time will tell.”

Keeping in the same vein of the Loft55 message, I ask about one of the more sensitive aspects that helped ignite the venture in the first place. Ali had spoken in our first interview about overcoming anxiety through mindfulness, which helped not just his state of mind but led to a pride in his appearance and ultimately the interest in clothing. I’m curious to find out if mindfulness continued to play a part in the journey?
“A massive part” he tells me.
“From writing peoples names in my note book to sewing buttons on duck hunter camo shirts. It’s all a mindful practice in so many varied forms. Literally stopping and thinking about people in a positive way is one of the best mindful activities I have discovered. I’m beginning to realise that you can potentially find mindfulness in any thing you do. That in itself is an incredible journey to be on.”

And what would you say to anyone else wanting to be a little more mindful?
“Give it a go. Dont think about outcomes. That’s where I went wrong at the start. I was trying to end my anxiety. No no no. It’s not about ending it’s about accepting and changing the relationship You have with your mental health.” With understanding comes knowledge. With knowledge comes power and with power comes the ability to change. Simple!”

As always, it’s been great catching up with my old friend, but we’re not quite finished yet.
I’ve thrown a load of questions at him so ask if he wants to take his time to deliberate over the remainder, but he’s on a roll now. Time for some quick fire then…

Sum up the Loft55 vibe in three words?
New York / Brighton / Vietnam. OK, they’re actual places but same as day one. Loft55 is the platform inspired by the people, music and history of all three locations I have a connection with.

Name one song that captures the essence of Loft55?
Ouch …. Ive got a whole heap of music to think about here. Club dancer, raver, dj, party host, Ive heard most things by now. OK, Have to go for
‘Love Is The Message’ by MFSB (Danny Krivit Re-Edit)
It’s a time and space thing as much as it is a piece of music. Would of loved to of heard this when it was released on a great sound system at a great party filled with amazing human beings there in the moment.  My wild assumption is that dancefloors will never have that going on anymore what with mobile phones and all that stuff. Hope Im proved massively wrong though as a fully connected dancefloor locked into the moment is a truly beautiful thing to be part of.

Any recommended listening?
If you’re feeling brave, search some 91-92 rave mixes on Youtube.
I also have a 5 hr mix on mixcloud thats good for dinner parties and late night gin n tonics with friends and loved ones.

As well as your own military background, are there more influences in this theme?
This stems back to when I was 7 years old. I was looking through my Mums Kays Catalogue and found a pair of kids Olive Green Combat Trousers I liked the look of. My Mum kindly got them for me and that was that really. A fan of military clothing for over 40 years.

Is there any advice you’d give anyone thinking about doing something new or different?
Hell yeah !! This comes from Nic – Just F**king Do It  (JFDI)  If you set yourself a goal or outcome then the whole thing can become solely about achievement. Take that aspect out then it becomes something totally different. My view being, if you’re doing something / anything then that’s a great outcome in itself. I would have missed out on so much in my first year if I had set goals.

Is there anything you’d change or do differently?
Nothing at all. Trial and error. Onwards, upwards and sideways (occasionally) I’m also pleased that I still dont have a website. I did set up one of those custom built ones (Big Cartel) but I sacked it off early on.

Before we wrap it up, and on behalf of the growing Loft55 community I ask if there’s anything being added to the range that we should keep our eye out for. Sticking with the brand ethos, he’s just going with the flow.
There’s been a few new pieces in the form of re-purposed military duffle bags that have been snapped up but nothing else immediately planned. As we are coming to realise though, that means something will come up sooner or later.

Where will Loft55 be in another year? Who knows!
What seems pretty clear is that the journey will continue in the same fashion as it has so far.
For Ali, that involves appreciating people, pushing his creativity & enjoying how his confidence has developed. Discovering, learning all the time as he approaches 50 years of age.
Most of all though, he’ll be enjoying the ever growing community as much as they’continue to enjoy the evolution and journey of ‘their little club’ Loft55.