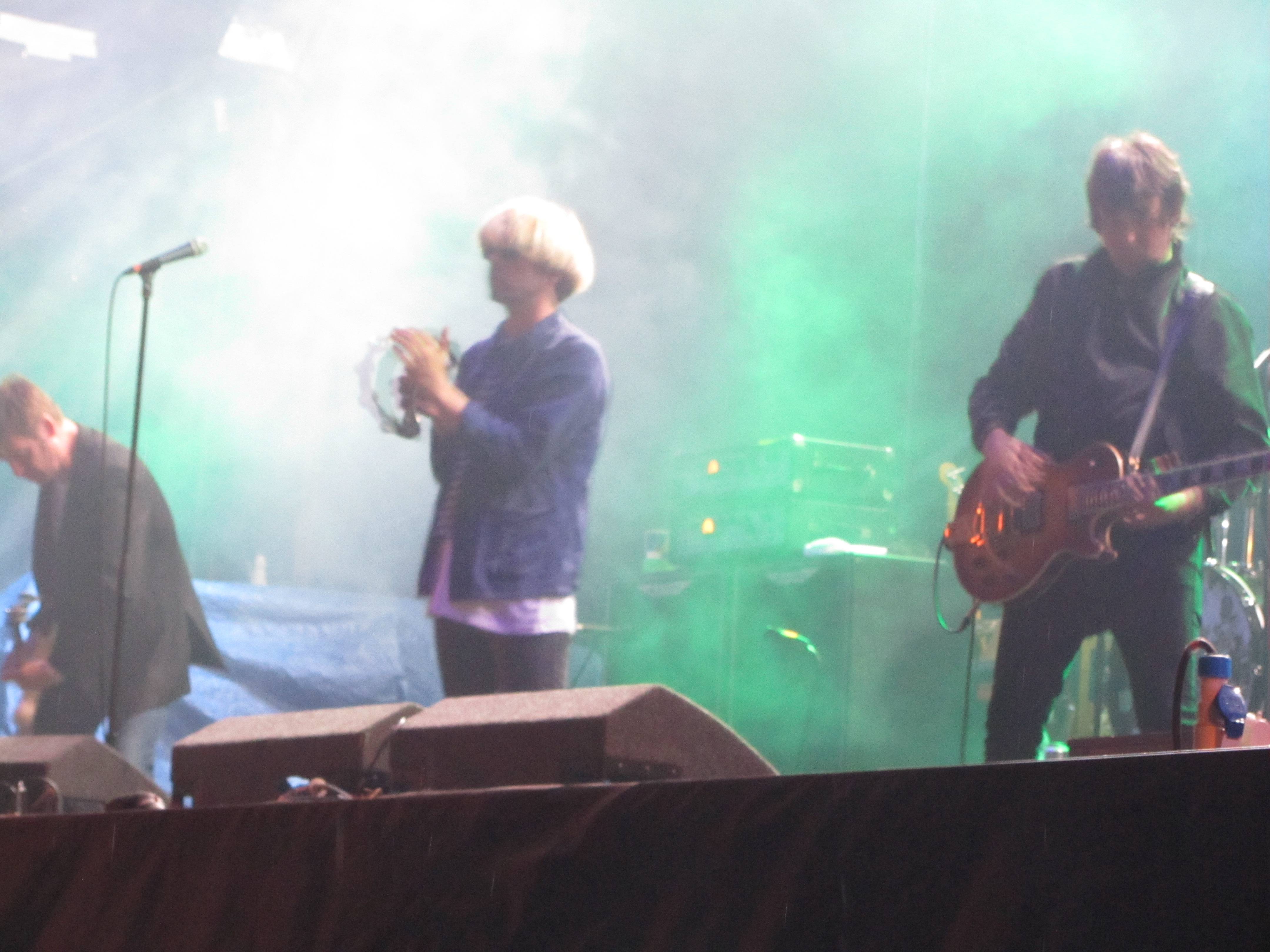 This month it’s my great privilege to be able to present the very first guest writer to the site. This is The Charlatans at Delamere Forest as reviewed by David A Currie. Makes for a cracking read.
Over to you David…

From the start of the day I knew this was going to be a great gig. My wife Lorna, me and our 8 yr old son Logan travelled down from Central Scotland in the sun, driving through the borders, brushing past the Dales and the Lakes to find ourselves in a very nice part of Northern England. The atmosphere was fuelled by the fine weather and the odd aperitif. Throughout the night the camaraderie was noticeably flowing as a mix of young and old gathered to bask in the sun and sounds of summer.
John Ainsworth (new to me) got things going with some guitar accompanied songs in front of a sparse front row, but a fully attentive crowd on the hill. It was off to great start.
Then TVS (The Velveteen Saints), nominally from Glasgow, took to the stage. A bus load of friends and family populated the near barrier area and the band hit the spot with a slick set of 50’s inspired, 2013 rock’n’roll. The Coatbridge mafia bounced to every tune and I was down there with Logan on my shoulders. His day was made when they played an oldie for this young band, Rock’n’Roll Is Dead and then topped off their set with a rousing cover of The Clash’s, I Fought The Law, joined on guitar by a Jonny Brown from Twisted Wheel.
Next up was more Scottish music from Dundee’s The View. Barefooted and big haired, Kyle and friends took to the stage to a surge of fans making their way to the stony standing area. Their set of fast paced shanties and indie guitar tunes was a mix of old and new, but the classics of Superstar Tradesmen and Same Jeans had the crowd bouncing highest. By the end of their set the atmosphere was at fever pitch and the security had all but given up on trying to control the beer throwing that is a feature of most enthusiastic Scottish gigs.
In between sets, the sounds were provided by The Beat Boutique. A great mix of Reggae, Northern Soul and Piano House. Taking some of the not so young crowd back to days when the arms and legs used to move to the same beats whilst the younger ones moved with a fluidity we can only dream of achieving again. A clear indicator of the longevity of The Charlatans and their fan base.
This brings us to the main attraction. The Charlatans entered the arena to a roar of fanatic anticipation and a sea of heads and arms. Mark Collins, Tony Rogers and Martin Blunt accompanied by Pete Salisbury, standing in for Jon Brookes, were dressed in the dark attire we are accustomed to. Once they were located with their instruments, Tim Burgess entered the scene. A bright star in the spotlight dressed from head to toe in white with the blonde mop top hairdo which has divided opinion among fans as he has restlessly toured his solo sound. But tonight it was perfect for his return as The Charlatans cocky front man.
As sets go, this was a fine mix of all that makes them my favourite band of our generation. Classics like Jesus Hairdo and The Only One I Know were mixed with more recent material. This Is The End and Oh Vanity were stand outs from this era. North Country Boy, Blackened Blue Eyes and Tellin’ Stories gave a taster of the mid life of this enduring band, whilst any setlist that includes THEN gets my seal of approval. This was my first purchase back when released in 1990. 23 years ago and it set me off on what has been a musical odyssey, culminating in yesterday’s road trip.
As with all Charlatans gigs, the end saw them perform Sproston Green. This time an added edge to the fans appreciation of this timeless classic was provided as Tim dedicated it to Jon Brookes, presently recovering from surgery. Get well soon.
As we returned home at 4am and I sank into my welcoming bed, my 43 year old bones whispered that this cannot go on forever. But as long as Tim and the band are dragging themselves around the country, THEN I will follow.