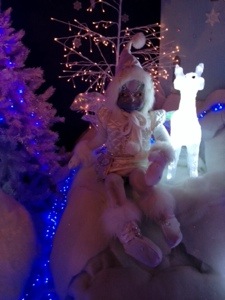 Time for another guest review folks, this time something seasonal, which I personally think will put a smile on the face of anyone suffering Ba Humbug type thoughts. It was written by a friend of mine who’d rather remain anonymous.
It made me roar with laughter…

Those of you who know me well will know that I am no literary genius, I leave that to my good friend Graeme Richardson. I am also a staunch , proud Lanarkshire man, having returned to my roots from being much travelled in my formative adult years. But today’s Santa experience at “Scotland’s Theme Park “, has left me feeling bewildered and needing to share my experience.

Storyteller, see Santa, real reindeers , ice rink and a free coffee/tea and a mince pie. An additional selling point was that the tickets were procured at a reduced rate…bargain?
Kids excited, buzzing , the decision was made to leave Edinburgh’s bustling German Christmas ’till next week.

Scotland’s theme park the sign says…Now, we weren’t expecting Universal Studios or Disney. We made the most of our “Fast pass” as my 8 year old called them and headed to the Storyteller. Excitement , anticipation as we entered the marquee done out like, well a crematorium with a Christmas tree and a rocking chair.

The lights dimmed and out came the story teller, fell over the table , knocked over a Christmas scene and sent the mildew table cloth flying. The kids loved it though, they laughed and he cringingly battered on telling a story about Santa giving a wee girl from East Kilbride an orange cat.
Well you’ve paid for it so you may as well enjoy it, I thought. He was more 1970’s working mans club than Santa elf, but he battered on.
It cannae get any worse I thought as he pointed to his wee pointy ears beneath his Santa hat and it was off to see the big man. Quite literally I thought, as he referred to Santa as some sort of enforcer and not the spreader of joy I know.
Santa’s little helper was sporting a black eye as if she had been hooked by a night club bouncer and her wee elfie pal with teeth as yellow as pissed on snow set the scene.
“Alright wee man, whit ye wanting fae Santa”, feck me was that a welcome or a challenge to fight I thought , but get in the spirit , it’s Christmas after all .
The pungent smell of real reindeer added an extra sense of realism to the experience as we waited in quiet anticipation to see the big man.
But wait, ” right youse go that way “, ” moan in this way ” as we were disorientated and marched into what looked like a sauna . “Alright Santa “, ” how you doing wee man, have you been a good boy”, the kids smiled , I shat my self and when the big man threw a couple of bags of gold chocolate coins at me , he gruffly threatened “look at the camera wee man”, and we were out of there into what can only be described as a hybrid of Disney’s small world and a scene from a Chucky film. I was half expecting the polar bear to shout “wanna play”?

Scary as fuck is the only way to describe it.

Santas little helpers showed us the door as I started to panic , was I ever going to get out? “it’s that wiy”, thank you , I said, with sincerity , “nae bother !” I have never been so happy to go up a fire escape into a good old fashioned amusement arcade, with it’s disorientating lights and noise.

“Please tell me this is over” , I pleaded with my wife. “No there’s the carousel ride still to do.”
I walked through a Christmas market, with glistening gifts, handmade and with talent. Metaphorically I had made it to safety. So I thought until, a woman mountain in a Santa suit and ugg boots dwarfed me. She menacingly pushed passed me. Her tiny Santa hat a poor cover for festive cheer.
But the kids enjoyed the ride as santas little elf in his new nike gutties battered on with his job of making it go round.
Back outside , through the Epicot of Motherwell and to the ice rink , now the excitement of hearing Des Clark welcoming voice blasting over the tannoy. A local radio DJ and comedian of national standing, a morning commute favourite of mine.
Sadly it was recorded. So onto the ice , all I can say is I survived, but that many blades in Lanarkshire has to be risk managed.

I gathered my family and into claim our last “freebie”, a coffee and a mince pie. You know what, they were gorgeous and the kids smiled as they tucked into theirs. My oldest devoured his hot chocolate in a rovers return textured pint glass.
I sat next to the precarious log burner inside the tent as we listened to Motherwell’s next big Xfactor wannabe .
It was over, we headed back to the car, adults bewildered and shocked, children , well happy even pointing out you get free refills here just like in Florida. Kids bounding home happy as we walked passed a big pink phallic boaby that smiled. I am now told was a hotdog.

A day to remember or a day to forget, I still don’t know, all I can say is M&Ds give a unique Christmas experience, that I for one will remember for years to come.