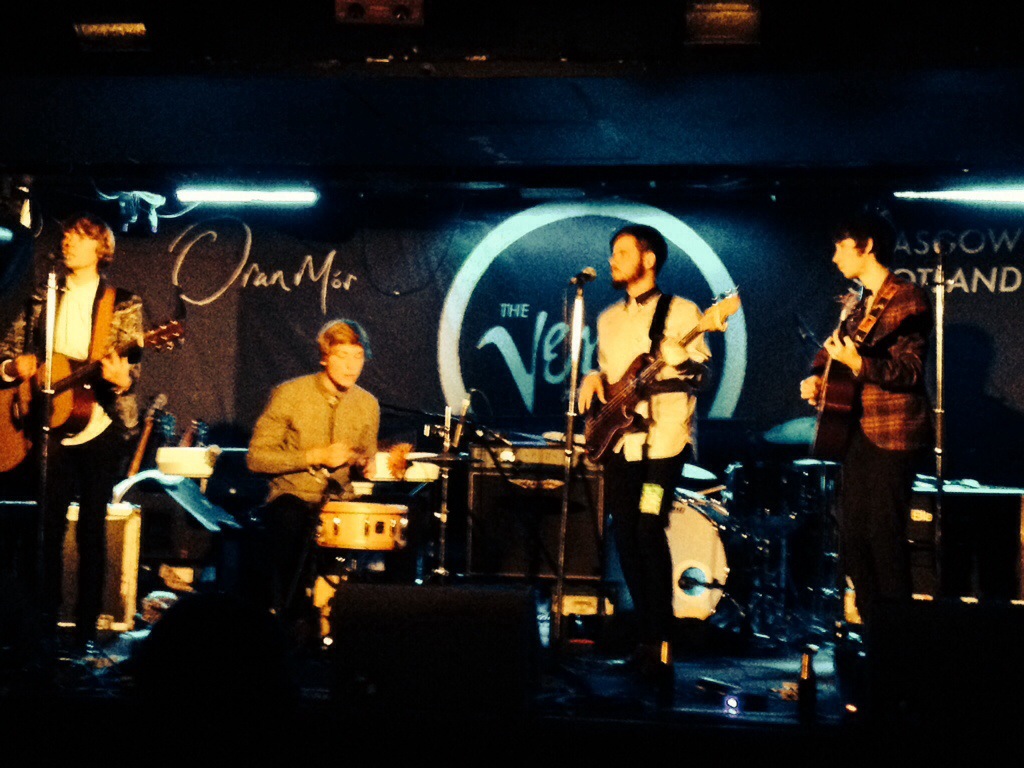 At 7.30 on gig night the Oran Mor in Glasgow is quiet. Doors opening around 7 means the bar, to the rear is always the busiest area at this time. Looking onto the gig area directly in front, it’s empty although the few dimly lit seated booths have been occupied. So too have the pillars on the edges of the dance floor, which with shelves for drinks, are amongst the premium spaces for early gig goers.
At a quarter to eight exactly, The Gramotones take to the stage.
‘Hello’, says Jake. ‘How you doin, we’ll be your support band tonight.’
And then they are straight into M62. They’re on form, their blend of indie guitar sounding pretty acoustic tonight. Drummer James clearly would rather be let loose on his full kit, but for tonight a cut down more laid back set means he has to make do with a single drum. With each song that passes a few more congregate in front of the stage, heads nodding and each song receiving increasing applause.
Both guitarists Sid and Jake take stints on harmonica and for anyone old enough to remember there’s an outing for the stylophone on Marjorie. Bassist Ryan has centre stage tonight and he, as with the rest of the band are clearly up for making their Glasgow debut a memorable one for the fans that have come out to see them.
Single Soldiers Kiss gets an airing tonight too, much to the growing crowds enjoyment.
Their only cover of the night comes at the end of the set, and as it comes in the form of The Band’s -The Weight nobody is complaining. It’s an apt song to close, summing up nicely a lot of the bands influences.
As they close their set, stage front has completely filled up and they leave the stage triumphantly, treated to a a well earned Glasgow cheer and a huge round of applause. This might have been the bands Glasgow debut, but on this performance it’s clear to see why Steve Cradock asked them to support him on tour and undoubtably won’t be the last Glasgow has heard of The Gramotones.

Shortly before 9.00 glass of wine in hand Steve Craddock whispers ‘Hello Glasgow’ and gets stuck in about opener Last days of the old world.
Next up R and R is dedicated to the late Lou Reed, a timely nod to the great man who sadly left us only days ago.
The Ocean Colour Scene man’s set comprises of old songs as well as more than just a smattering of his new material.
With each song from the new album though, comes another round of good natured banter from the Glasgow crowd.
By the time he finishes his set, they are whistling, cheering and calling him back by name (and perhaps more than a few shouts back for band member Sally too) for an encore. He reminds everyone just one more time there’s a new album out before leaving the stage, only to return to the merch stall to sign and chat the remainder of the evening away.
Travel Wild Travel Free is available now from http://www.stevecradock.com