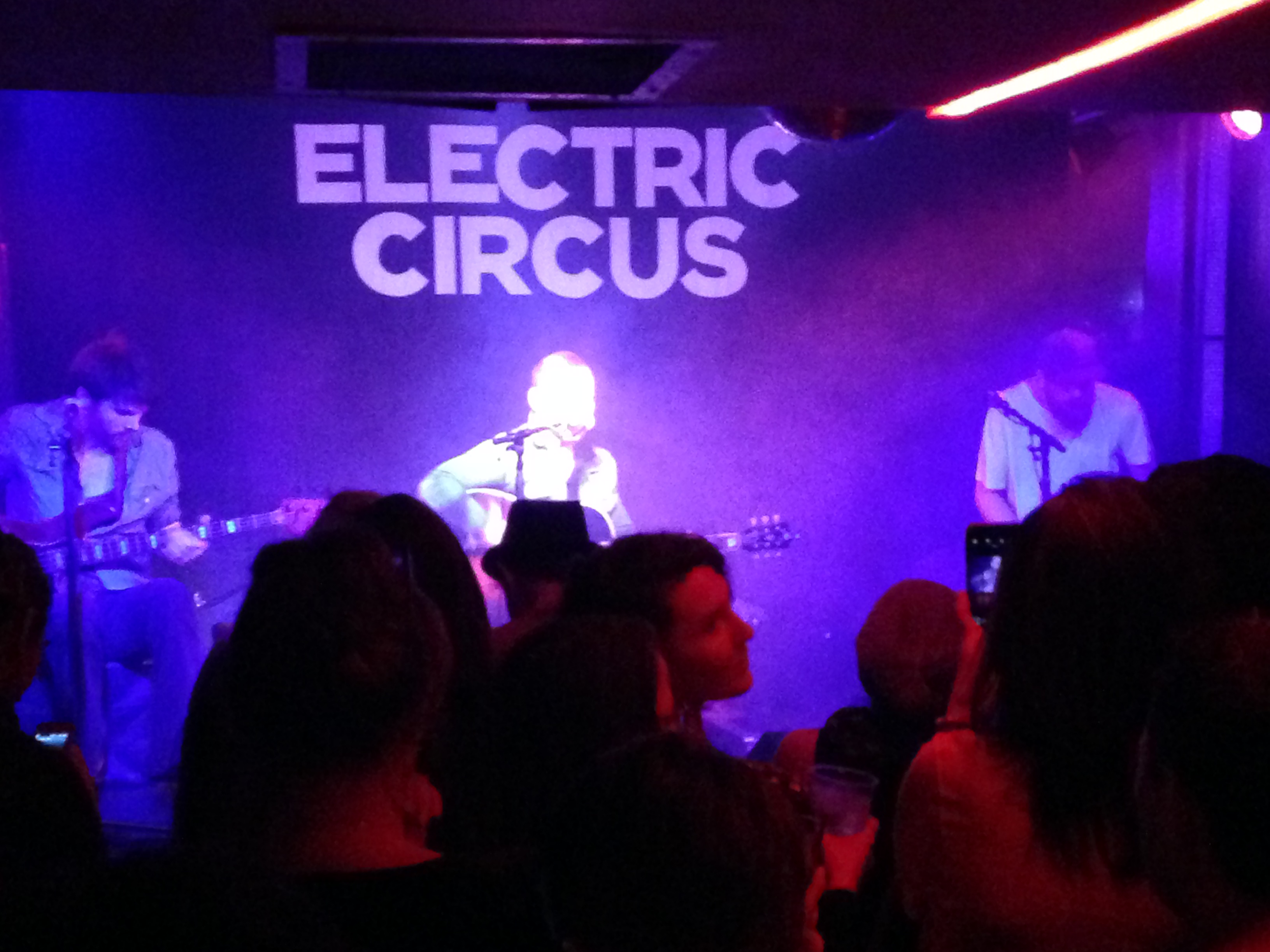 After years of gigging, last night was, embarrassingly, my first ever visit to Edinburgh’s Electric Circus.

Excuses, I have none, albeit perhaps that my musical junkets in Scotland have predominantly been in Glasgow,
save a smattering of Edinburgh gigs over the last few years.
Electric Circus is a quirky little place, the low slung ceiling giving it that very intimate feel as soon as you wander in. Through the front door and handily the bar is straight ahead. Seating to the right and off left just about 10 metres in front is the small stage.
As we arrived around 1945, Megan D, had kicked off the evenings entertainment (which had been put together by @JuliahMusic to raise money for Radio Forth’s Cash For Kids) warming up the already ample crowd. Following a short set, Ross Arthur and his guitar ran through a few numbers of his own. Fair play to the lad, not many would have the confidence  to cover Jessie J’s Price Tag for the waiting crowd. He pulled it off too, leaving to a well deserved cheer and round of applause.
As The Rising Souls took to the stage we stood up from the comfort of the leather lounge sofa’s we had somehow managed to acquire at the back of the room. The opening five chords of album opener “Don’t Say You Love Me” reminds me somewhat of The Doors Five To One.
Only though until ‘that’ voice grabbed the attention of my eardrums. Sounding far older than his years,
you’d be forgiven for thinking that around 60 Bensons a day were part of his regime. This is the gruff and yet sweet soulful sound of lead singer Dave Archibald. I wasn’t the only one immediately transfixed to the stage.
Three songs in and my personal favourite The Boxer had everyone mesmerised.
Three band members, somehow making the small selection of instruments sounding like so much more.
To Dave’s right on bass is Kelso.. imagine what what Russell Brand might look like if he got his plentiful locks chopped a bit shorter. Side left, sitting on a box (sorry music peeps…. it’s a cajon don’t you know) was Tom, who hopefully won’t be offended if I say I thought there was a bit of a Scroobius Pip vibe being rocked. Well cool!
The evenings set was executed to perfection. More than one person told me they’d listen to this all night and I found it hard to disagree. Finding the balance between up tempo foot stomping, and laid back grooves seemed to be carried out absolutely seamlessly and with ease.
So what exactly do these guys sound like?
Well, I’d heard the first album the band made as a four piece and it definitely emanated quite a rock vibe. Perhaps with lead singer having the whole Mark Rankin denim jacket going on, I remember thinking a refined GUN, for those old enough…. But wait!
STOP PRESS
The four piece rather rock sounding Rising Souls came back as a three piece with musical direction taking a very, very interesting turn.
The voice contains the same passion and soul as I remember yet there is a definite more bluesy feel to the music.
More than a couple of times I’m sure I hear something a little Doorsey coming into the sound.
But what inspired the change of direction I wondered. It’s always interesting to see bands changing genre, particularly when the result is as satisfactory as this one. The edginess of Dave’s vocals, I thought was perfectly suited to the rock sound but mixed with the bluesy feel just seems… well, so right.
I asked Dave after the gig about the change of direction, which seemed like a natural progression, following a few acoustic sessions he and Kelso had done together, following the release of the first album.
Listening to the likes of Otis reading, Ella Fitzgerald and Sam Cooke he explained that writing music inspired by them is what had become the most natural thing to do.
What happened though is that the rock undercurrents still eminate and the result is something quite rather spectacular.
Opening lines of The Boxer sum this up perfectly for me….
I am a firecracker, I”m going to melt you down.
I’m not a lover, I’m a fighter whose in doubt..
Put on those boxing gloves and I will knock you down.
But the count to 10 aint long enough so throw that towel now.
Man you talk a pretty good game now but it aint so good
When your lying seeing double…..
Like most in attendance last night I could not disagree. This was a group of young men looking very comfortable, natural and thoroughly in love with what they were doing.
As the band name says, these boys have soul.. Watch them rise!