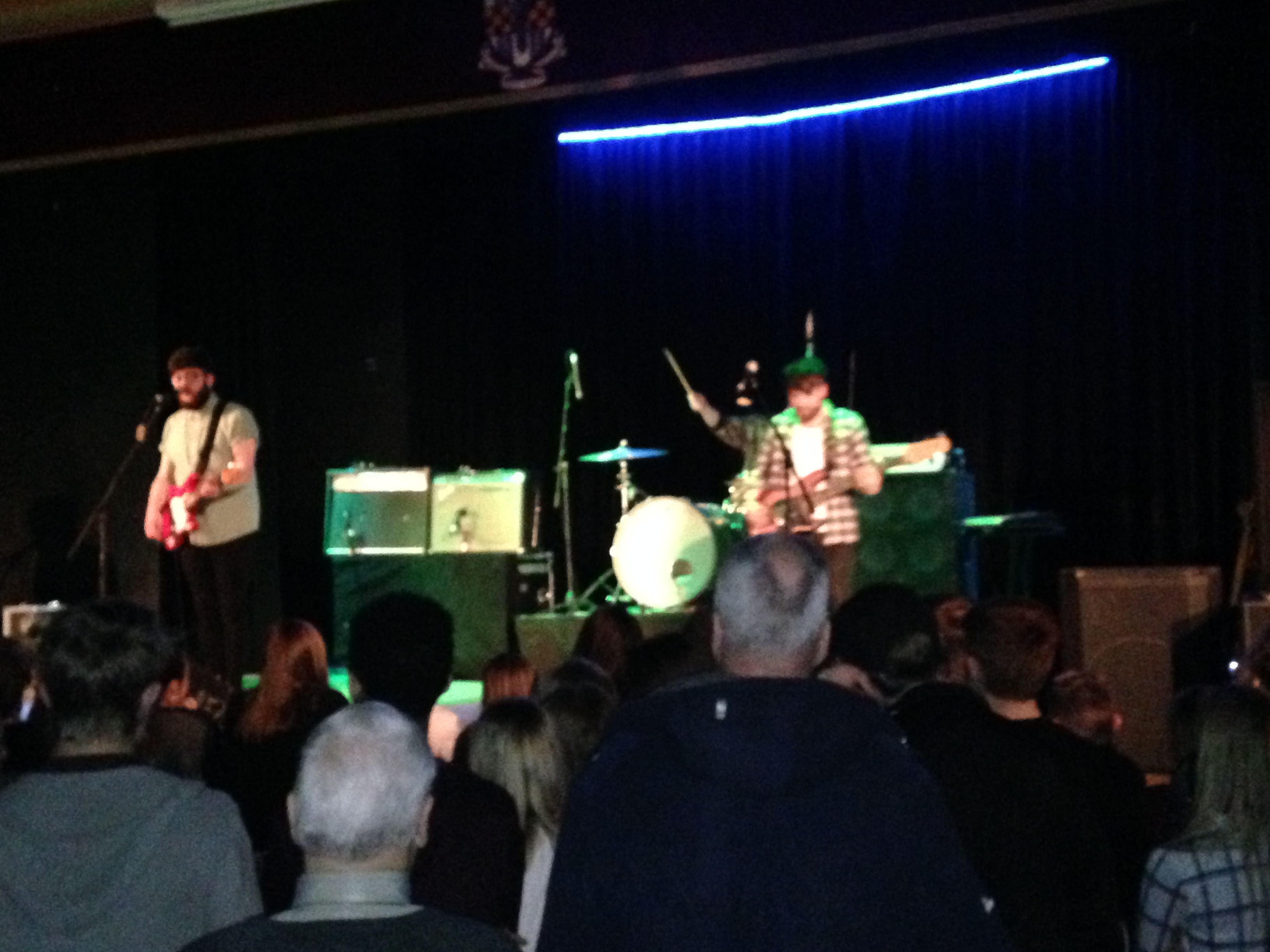 When two students at Kilmarnock Academy told their Head of Music / Deputy Head Darren Ramsay that they’d really like to put on a gig in the school as an enterprise activity, Mr Ramsay was more than happy to help the pupils out.
So, with the help of their teacher, the two passionate music lovers Regan Kelly & Bryce Campbell set about pulling together an evenings entertainment to be hosted in Kilmarnock Academy on 06 March.
Whilst the boys considered sound requirements, advertising and promoting, ticket sales alongside the all important compliment of bands for the gig, Mr Ramsay wondered how he might be able to surprise the students with a bit of a reward and thanks for the idea and hard work they had committed too.
A couple of phone calls later, to some ex students of the Academy and the wheels of his surprise were set in motion.

Fast forward to Friday 6th March and early evening around 1815, I arrived at the school accompanied by avid music nuts Heather (my daughter) and her pal Kayleigh. Met by Darren and escorted through the school assembly hall, (whilst one of the local brass bands were still rehearsing) later to become our gig venue for the evening.
We chatted in his office a little about how the organisation of the event had gone and looked forward to the evenings entertainment.
Shortly before 1900 and not long before the doors opened to the waiting line of excited music fans outside, Darren led the girls and I back up to the assembly hall where he introduced us to Fatherson lead vocalist Ross and bassist Marc. I chatted with Marc briefly who told me how much the band had enjoyed the recent UK tour supporting Enter Shikari and how much they were looking forward to the evenings event.
It had all come together out of luck really, as the band were shortly heading across the pond to play a gig in New York before making their first appearance at SXSW (South by South West) music festival in Austin Texas later this month. All this amidst sticking to a rigorous university schedule.

With Fatherson having taken their leave to backstage, the doors were opened and the hall filled with what it probably best described as an intimate crowd. Perhaps no more than 50-60 were lucky enough to have a ticket.

The music started with Deficits, the duo consisting drummer and guitarist / vocalist, took to the stage. After only 12 days together as a band, they played a short set comprising original material and few covers by the likes of White Stripes, Black Keys and Royal Blood. A great start to the evening.
Next up was solo artist Liam French, who along with his acoustic guitar, I was told reminded Heather and Kayleigh of a combination of Nirvana, Ed Sheeran and Oasis. High praise indeed for the young man, who then duly covered Oasis’s Live Forever quite beautifully in his set also comprising a couple of his own self penned numbers.
New Frontiers burst onto the stage like seasoned rock n rollers and with the obligatory “Good Evening Kilmarnock” they were off. With front man clearly no stranger to the limelight and a quite outstanding lead guitarist, the bands eclectic blend of rock music hit all the right notes with the small crowd.
With penultimate act New Girls we were promised to be in for a treat. And even although the eccentric front man had to endure some fairly turbulent moments on stage (as his guitar string snapped and he searched for a replacement) the band took us through their reportoir with much aplomb. What better way to finish their set than with a rousing rendition of Seven Nation Army.

And so to the headline act of the night. Kilmarnock’s very own sons, Fatherson took to the stage just before 2230. Clearly excited to have the boys on stage the crowd erupted into what can only be described as a mini mosh pit…. quite quirky given the fact we were standing in a school assembly hall. Even more beautiful was the echoing cries from the front few rows of “Here we, Here we, here f$%&ing go.”
“We’re in a school, we shouldn’t swear really” singer Ross teased the crowd.
“Oh, go on then….BOOBS, he whispered.”
The band were on top form, music levels turned up and sounding particularly tight, vocals, guitar and drums combining to make their melodic, anthemic Scottish rock sound filling the hall quite sublimely.
They seemed right at home, as they told us this was them back to where they played their first ever gig it made the evening all the sweeter. I couldn’t help but think that years from now, the very lucky few in attendance will remember the night, and perhaps the evenings rendition of Hometown, with particular fondness.
It’s only fair that the last word though is that of much thanks and very well done to Regan, Bryce and Darren for putting on a fabulous show. Nice one gents!
http://www.fathersonband.co.uk