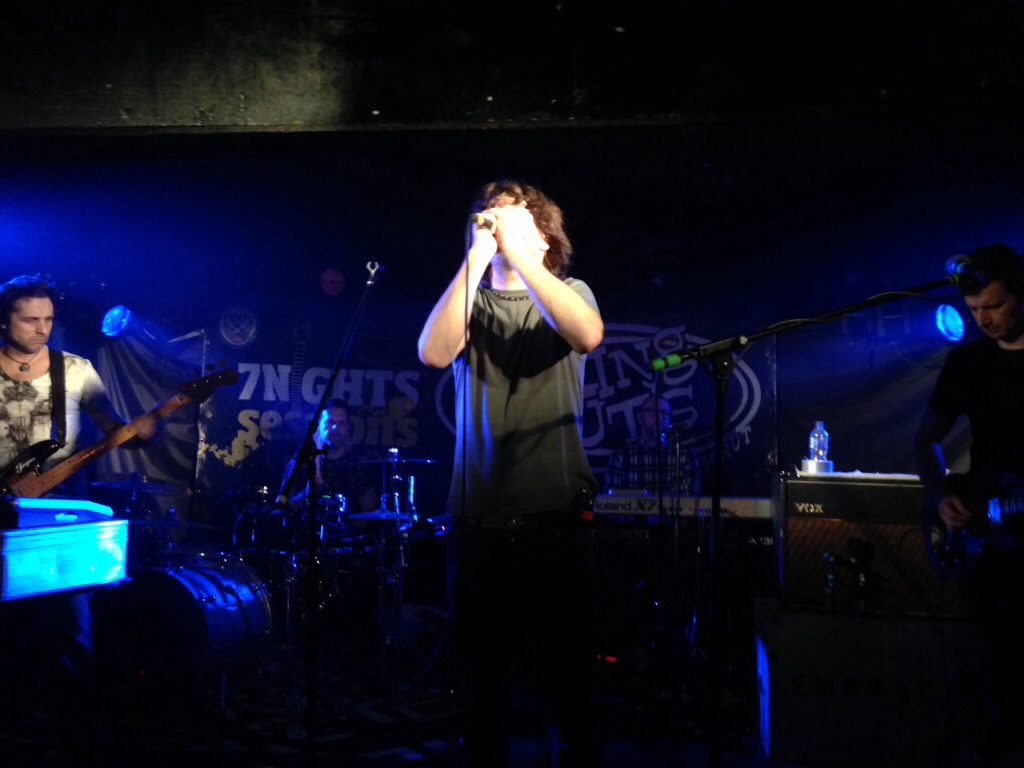 Embrace’s first gig back in nearly eight years took place on Wednesday night.
As they took to the stage, arms aloft, lead singer Danny McNamara told the crowd
“First gig back in nearly eight years, where do we want to go first? We want to go to fucking Glasgow don’t we.”
And then, (not that the King Tut’s crowd needed any more encouragement) the roar inside Scotland’s finest small venue would have easily filled places 5 times the size.
They were off and running as new track Protection opened proceedings.
It’s dark mysterious beginning, rather in keeping with the mood of new single Refugees, gave way to Blue Monday esque drum machine beats being dropped on the crowd. A new direction for the band known for their anthemic sing along tunes? Perhaps only time would tell.
Second new track In the End is more up beat and reminiscent of the Embrace everyone remembers. As it closes, just in case any of the crowd were wondering, Danny chipped in,
“It’s fucking good to be back.”
Comeback single Refugees with Richard McNamara on lead vocals was given its first live treatment and received a tremendous King Tuts reaction, before red glow sticks ( a neat little touch the band had added to great effect, building atmosphere at one of their now infamous ‘secret’ gigs) were introduced for another new, slower number, again well received.
In traditional King Tuts style, the small space directly in front of the stage was packed full of the Glasgow faithful, known for their banter and ability to let the band in attendance know exactly what they are thinking.
As the opening chords of Ashes sprung to life, the low black walls and ceilings might have been mistaken for sweating themselves.
By this point, it was clear the band were not only relaxing into the task at hand but also starting to realise just how much they had missed the feeling they were so clearly enjoying.
Veciferous Scottish chants of “T in the Park” “Come on” “ya Beauty” amongst others were met with equal response from the band who were all well and truly strapped into the emotional roller coaster they’d been missing for so many years.
As the tempo shifted from song to song, each member of the band had on show, emotional displays ranging from sheer exuberance to that of thoughtfulness and contemplation.
Before ‘Gravity’, Danny caressed the microphone and closed his eyes briefly in a moment where a picture said more than a thousand words could. Likewise were the glances of sibling re-assurance that he frequently shared with brother Richard.
For a band who’ve been away so long, it was alway going to be an emotional return..particularly in a city world famous for the emotion and passion they put into everything they do.
The band showed there’s a new direction.. It’s not a million miles out of kilter from that which everyone previously knew but clearly they have been inspired to add enough of a smattering of experimentation combined with raw emotions to cement the new sound.
Set closer “Thief” Summed the night up nicely.
With its haunting intro, before the tempo was upped and some hefty reverberation on the keys gave way to crashing huge beats… Then another final twist of sheering, sawing guitar and the sudden closing thuds of the drum machine left the Glasgow crowd shouting for more.
Eight years out has revitalised the band, who appeared invigorated and inspired. What we have is a darker sound, but Embrace are emphatically Back!

Oh… They still have a sense of humour though.
“It’s like riding a bike” Danny told the crowd as they came back for an encore.
“What shall we play” he asked
The reaction was unanimous as King Tuts burst into its own chorus of Come Back to What you Know.
“Ah” he said “we’ve not rehearsed that, “We may fuck it up”
They didn’t, they rocked it, and as everyone left King Tuts, it was more than the odours of Glasgow sweat and beer that lingered…
Glasgow reeked of an emotional, triumphant return. A comeback? Yes, but to much more than what they or we knew.